Why Read This Report

In a world where business models face constant disruption, digital business imperatives are driving architects and technology leaders to embrace modernization to remain competitive. However, traditional monoliths running on Java EE middleware were not designed with cloud-native elasticity and development agility in mind, making them a bad fit for today’s needs. 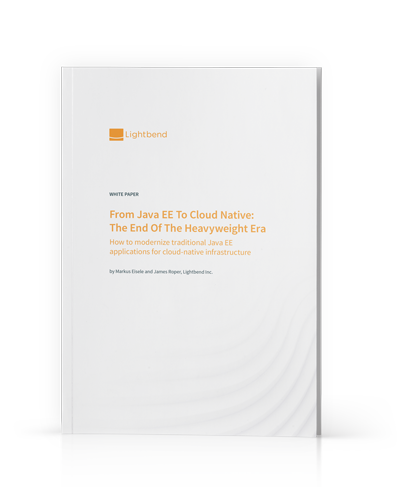 This report helps architects and technology leaders understand the business impact of modernizing existing Java EE legacy systems. In the modern world of streaming data and multicore cloud computing, businesses need to be prepared for cloud-native approaches and microservices-based architectures in order to survive.

Over the years, the use of legacy technologies and expensive Java EE middleware servers has resulted in the pervasiveness of large, monolithic applications. Enterprises are becoming bogged down with long release cycles and increasingly complex applications, leaving teams unable to achieve a high level of development productivity as well as firefighting production systems with an unhealthy amount of interdependencies that were never designed for cloud infrastructures.

Achieving ROI in the cloud starts with designing distributed architectures and decomposing monoliths into individual, decoupled microservices, ideally based on the characteristics defined by the Reactive Manifesto. Distributed microservices enable enterprises to be flexible—able to adapt to complex environments—and quickly roll out new changes without rigid dependencies and coordination. These systems are built for flexibility and resiliency, not just efficiency and robustness. They scale massively at any given moment without compromising infrastructure. Many distributed systems, in particular Reactive Systems, are capable of rapidly identifying, reporting, and self-healing in the face of failure at any system level.

Cloud Native And The Future Of Java EE

By 2019, fewer than 35% of all new business applications
will be deployed in Java EE application servers.

Global 5000 enterprises that never before considered themselves as technology companies are now faced with digital business imperatives that force them to modernize their infrastructure. On the path to becoming a digital, on-demand provider, development speed is the ultimate competitive advantage. With technology and business innovation inextricably intertwined, businesses must adapt with greater agility than ever before.

For the majority of use cases, however, the Global 2000 do not have the luxury of starting with a greenfield infrastructure such as digital natives LinkedIn, Netflix, or Airbnb. Changes need to be made within existing frameworks to keep pace with new web-scale organizations. This presents challenges to many organizations that have huge investments in legacy Java EE infrastructure, where technical debt and monolithic system architectures require modernization in order to confront the following business risks:

For a decade or more, enterprise development teams have built their Java EE projects inside large, monolithic application server containers without much regard to the individual lifecycle of their module or component.

Hooking into startup and shutdown events was simple, as accessing other components was just an injected instance away. It was comparably easy to map objects into relational databases or connect to other systems via messaging. One of the greatest advantages of this architecture was transactionality, which was synchronous, easy to implement, and simple to visualize and monitor. Projects were released twice per year, had multi-year lifespans, multi-month test cycles, and large teams to manage everything.

But those days are now at an end. Due to the lack of agility, applications grew enormous, leading to the accumulation of technical debt, slower development velocity, and longer release cycles. Here's how

Scaling monoliths is too expensive for the cloud

From a production perspective, the classical monolith relies on heavyweight infrastructure and rarely scales inside the application server itself. Scaling, therefore, requires vast engineering resources, making it a clunky, expensive, and inefficient process.

Streams and ‘data in motion’ need to be supported

Since its invention, the way people use the internet has fundamentally changed. A tidal wave of connected devices, sensors, and intelligent home appliances has caused demands to grow exponentially.

In 1995, less than 1% of the world population had an internet connection. Today it’s around 40%. The number of internet users increased tenfold from 1999 to 2013. The world’s billionth user logged on in 2005, and by 2010, that number had doubled to two billion. In 2018, the internet reached four billion users. In response to this rampant growth, the business requirements for modern applications have drastically changed:

The Shift Towards Real-Time Streaming Systems

To address all the shortcomings of traditional monolithic Java EE applications and the heavyweight middleware and infrastructure needed to run them, developers must shift their thinking. Both systems and organizations themselves must increase flexibility, adapt to complex environments, quickly roll out new changes without rigid dependencies and coordination, know how and when to behave in certain ways, scale massively at any given moment without compromising infrastructure, and most importantly, be able to rapidly identify, isolate, and self-heal in the face of failure at any level. The steps for achieving these goals include:

Designers need to build systems for flexibility and resiliency, not just efficiency and robustness. This necessitates the redesign of existing Java EE applications into more flexible modules that are self-contained, autonomous, and can be scaled independently, as they are responsible for their own business context from individual features down to the relevant data. To make it easier for business leaders, IT professionals, and third-party vendors to innovate and collaborate around these new systems, a common vocabulary was established in the Reactive Manifesto to cover these requirements: Reactive systems are Responsive, Resilient, Elastic, and Message-Driven:

Rather than thinking of microservices architecture as Service-Oriented Architecture (SOA) 2.0, developers now have the Reactive Manifesto to help them apply the principles of Reactive systems to real-world domains. The requirements of microservices architecture can best be identified with the help of Domain-Driven Design (DDD), an architectural principle that recommends designing systems to reflect real-world domains, considering the elements, behavior, and interactions between business domains.

Microservices operate on principles similar to those of DDD. Each microservice owns its data and must be responsible for a specific feature or functionality, and be able to work together as a system to form an aggregation of cohesive functionality. A good rule of thumb is to gather services that change for the same reason while separating those services that can change for a different reason. This can be achieved by designing systems that:

Prioritize resilience before thinking about elastic scaling in the cloud

Most applications are designed and developed for blue skies. But all software across all time has failed and will continue to fail. Today’s applications, therefore, must be designed with the inevitability of failure in mind.

With cloud-based microservices architectures, things are even more complex: these applications are composed of a large number of individual services, adding a level of complexity that touches all relevant parts of an application in order to measure availability and recover from failures.

These new requirements force designers to reconsider how they incorporate error handling and fault tolerance into applications. Modern applications must be resilient on all levels, not just a few. Reactive systems, therefore, place a critical focus on resilience, which enables systems to self-heal automatically and adopt a confident attitude to routine errors or failures that are managed quickly.

The key to achieving this is message-driven service interaction, using streams, which automatically provides the core building blocks that enable systems to be resilient against failures at many different levels. In turn, these building blocks serve as a rock-solid foundation that is capable of scaling in and out elastically across all system resources.

Traditional Java EE monolithic applications rely on technologies and architectural approaches that are in conflict with the properties needed to create resilient and scalable systems. This is seen most prominently in the use of a central database and distributed transactions to handle all distribution, concurrency, and supervision concerns. These techniques, however, violate isolation, coupling all the systems that use the database and coordinate transactions together, preventing resilience, scalability, and leading to a lack of responsiveness.

A Reactive, streaming architecture is the major booster that provides distribution, concurrency, and supervision without the use of a central database and distributed transactions, allowing isolation between services in order to achieve resilience and scalability. Streaming architectures supervise operations and processes at the stream level, ensuring progression of operations through consumption and distribution of streams.

Akka has consistently allowed us to cut 80% of infrastructure, or increase overall application performance by 5x, when compared to the traditional systems we replaced.

To address the business challenges of modernization, many of the most admired brands around the globe are transforming their businesses with Lightbend, engaging billions of users every day through software that is disrupting their markets. Lightbend Platform provides scalable, high-performance microservices frameworks and streaming engines for building data-centric systems that are optimized to run on cloud-native infrastructure. Supporting both Java and Scala, Lightbend Platform includes the Akka message-driven runtime, Lagom microservice framework, Play web framework, and Scala programming language. With Lightbend, development teams can deliver highly responsive user experiences backed by a resilient, message-driven application stack.

This enables product teams to:

For many enterprises, using data-driven insights to deepen customer engagement over web, mobile and IoT applications is a focal point of digital transformation. Consequently, architectures are shifting from batch to streaming.

Many digital transformation initiatives at large enterprises are being sparked by either The Innovator’s Dilemma in which market leader successes and capabilities have actually become obstacles to seizing the next wave of innovation, or the Reinventors in which successful companies are using a key asset to capture a new market.

Improving agility and time to value

In a world where business models face constant disruption, your digital transformation initiative is likely driving you to embrace speed to remain competitive. However, traditional application monoliths running on Java EE application servers were not designed with development agility in mind. With no simple development model to support modern systems, the traditional compile-build-deploy cycle for every service cripples productivity.

Nearly every digital transformation initiative includes a cloud strategy. And, nearly every industry analyst will tell you, if you want to take advantage of the cloud, you can’t lift and shift. Your applications need to be architected for the cloud. In fact, Gartner is recommending you design every new application to be cloud-native, even if you plan to run it on-premise.

With your digital transformation, a tremendous amount of development lays ahead. If your developers are hamstrung by old tools, it will be nearly impossible to keep your project on track and your top talent engaged.

The Days Of Java EE Monoliths Are Ending

After almost two decades of building Java EE monoliths that are slow to evolve, complicated to release, and expensive to maintain, modern enterprises are looking to new system architectures for running their business.

The centralized Java EE middleware approach became ill-suited to the always-on, real-time nature of cloud computing. To achieve the full business benefits offered by the cloud, today’s systems must be lean, flexible, and Reactive. Lightbend helps developers create applications that are responsive, resilient, flexible, and message-driven. Built on a foundation of Domain Driven Design and based on services rather than plain objects, Lightbend provides the perfect architecture for creating powerful, adaptable applications that thrive in the cloud.