The combination of extensible, open, dynamically scalable infrastructure (Kubernetes plus Kudo), with an extensible, open stateful runtime (Akka) opens up amazing possibilities. You can represent the state of thousands, if not millions of connected IOT devices, interrogate them, apply AI on the data they produce, and gain insight into how your world works. You can start small, and let your systems scale to the level you need to serve your customers and their data, and not worry about limitations of services, or data stores.

In this article co-authored by Michael Beisiegel, Principal Partner Solutions Architect at D2iQ, we describe how Kudo simplifies development of Kubernnetes operators, simplifies operations tasks, and speeds the time to value for stateful applications built with Akka.

Cloud Native applications are built as a composition of microservices that run in containers, which are orchestrated predominantly in Kubernetes. Each microservice runs as a collection of containers. As the processing load on a given microservice goes up and down, the Kubernetes container orchestration makes it easy to scale resources up or down. It will increase or decrease the number of running microservice container instances.

Stateful microservices provide alternative microservice processing patterns. One stateful processing pattern maintains the state of things, entities, such as order entity instances, in memory. With this stateful entity approach, incoming requests that alter the state of a given entity are routed to the in-memory location of the entity. The request is processed, and the entity state is changed. Of course, the state change must be persisted. However, maintaining the state in memory significantly reduces the state retrieval overhead.

At first glance, this stateful entity approach looks complex. How are requests routed to the correct in-memory entity? How do you ensure there is only one instance of a given entity in a cluster of stateful microservice containers? What process is used to distribute entities across a cluster of multiple containers?

As it happens, that actor model is a perfect solution for handling large clusters of individual entity instances that are distributed across multiple containers. With the actor model, actors are the units of computation. Actors are implemented in software, and they must follow a simple processing pattern.

One unique actor characteristic is that the only way to communicate with an actor is to send it an asynchronous message. The message sender does not automatically wait for a response. In response to a message, an actor may make local decisions, send messages to other actors, it may create other actors, and it may determine how to respond to the next message. The actor as a unit of computation is a relatively simple but powerful building block.

Akka is an implementation of the actor model. From the Akka.io homepage, “Akka is a toolkit for building highly concurrent, distributed, and resilient message-driven applications.” 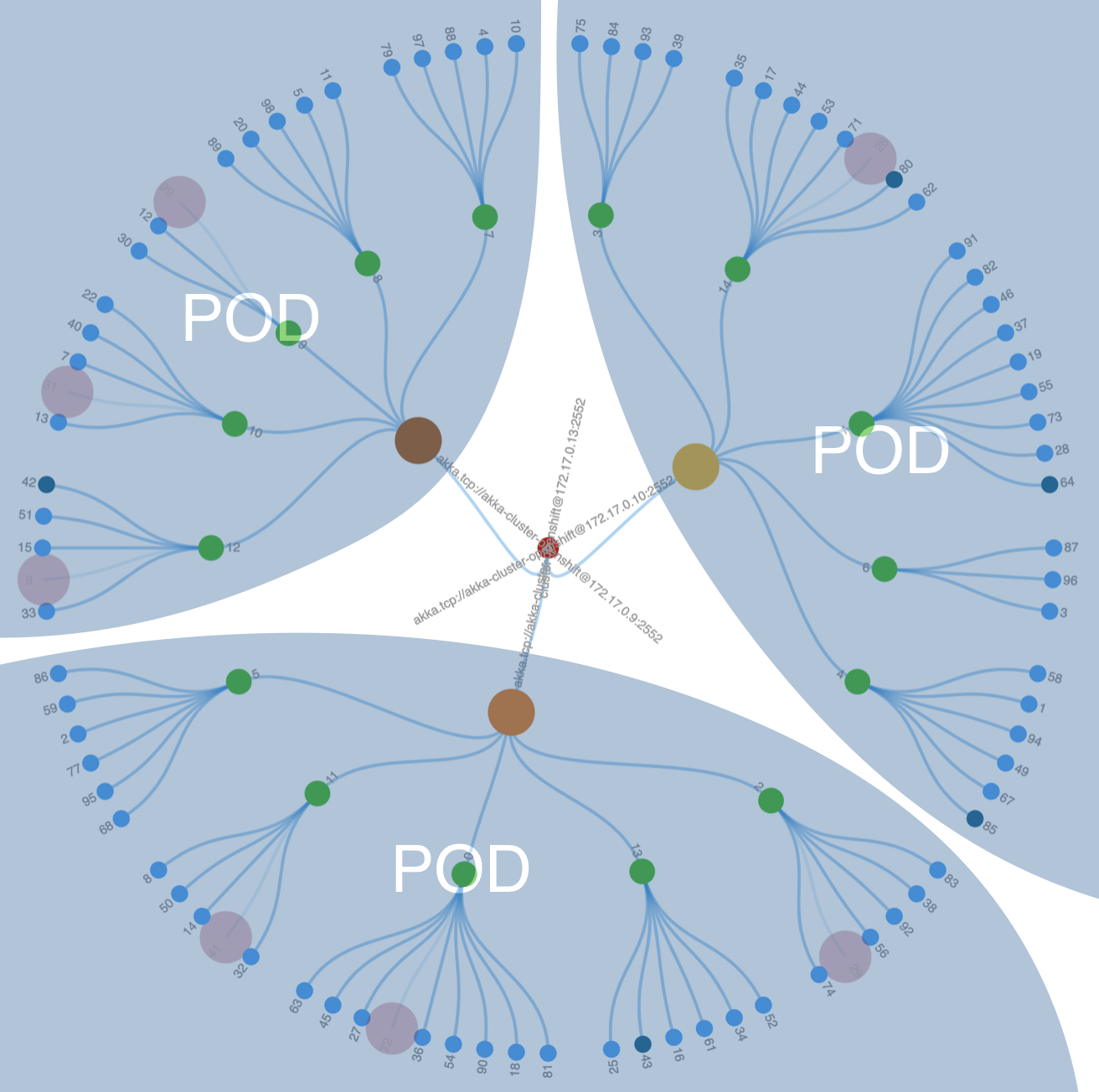 Let's look at a more specific example. In the figure above is a visualization of an Akka stateful microservice. This microservice is currently running across three containers. Each container is running a JVM, and Akka is running in each JVM. Within each JVM in the figure is a hierarchy of circles. These circles represent actors. Actors form a hierarchy of parent to child actors where the higher-level circles are actors that have created lower-level child actors. 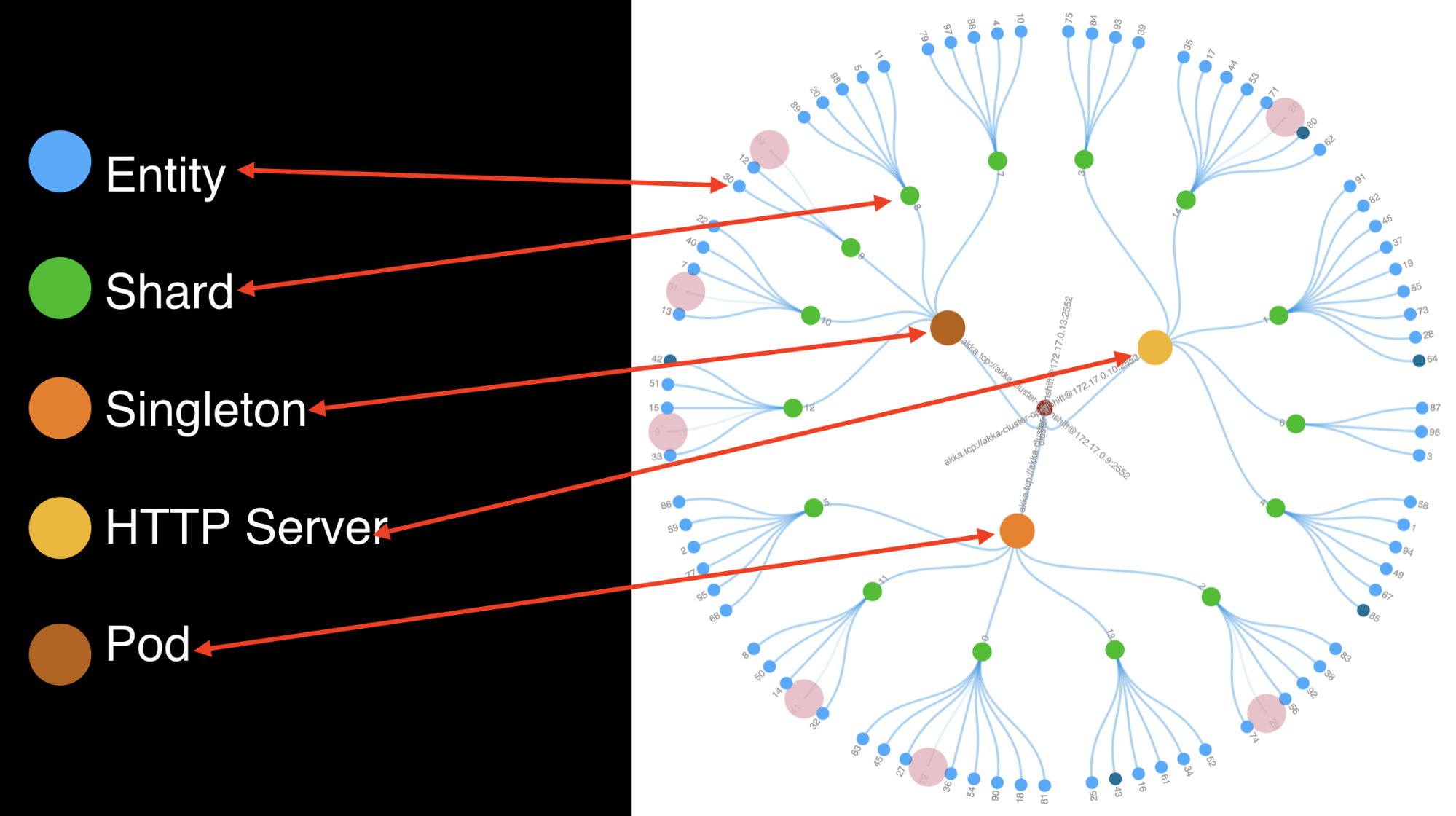 Each actor represented by the circles in the figure above represents different types of actors. At the perimeter are the main actors. They are entity actors. These entity actors are handling the state of entities, such as an order entity. 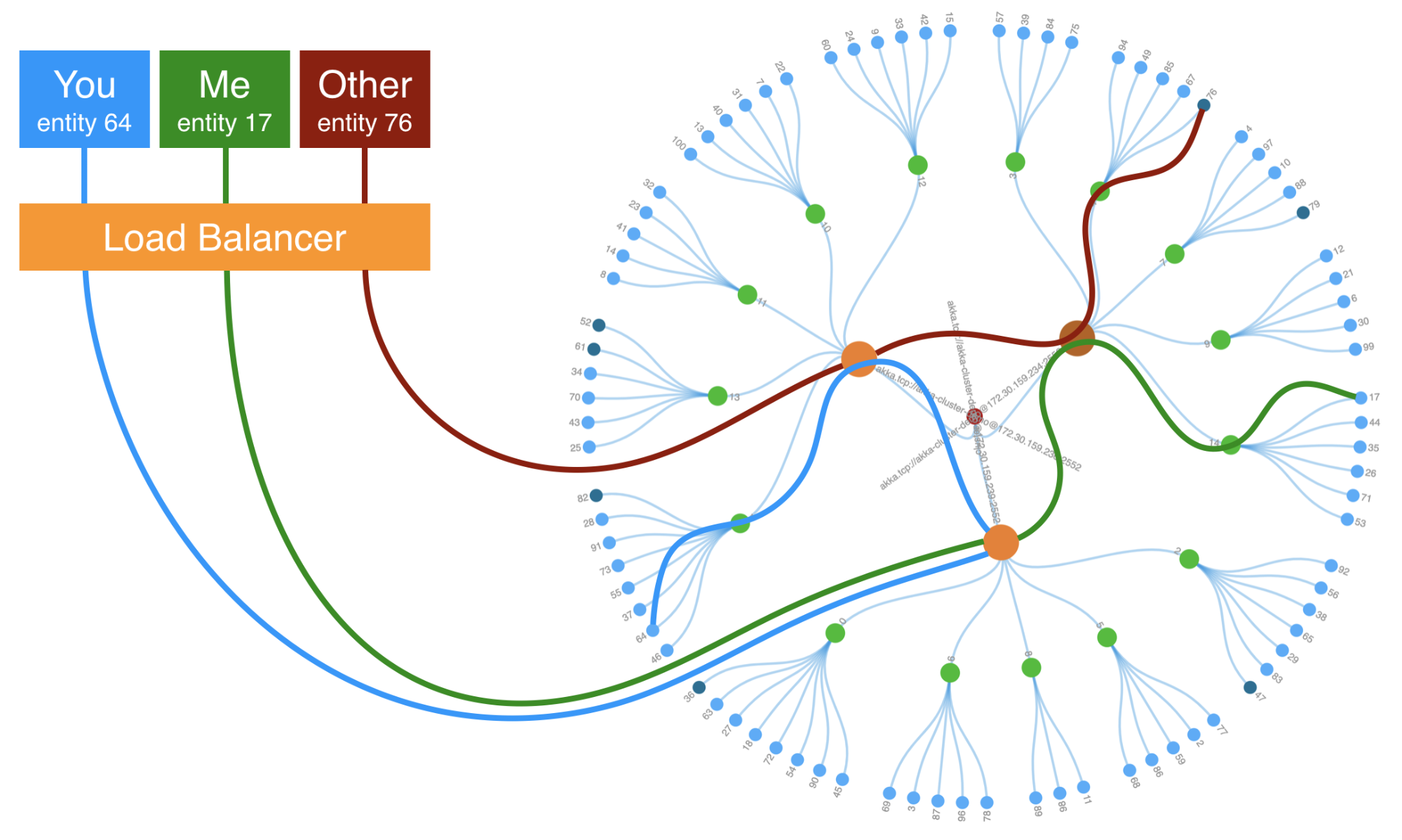 Here, shown above, is an example of how incoming requests are routed to entity actors. Say you are currently using an app that is interacting with entity 64. Imagine that each entity is a shopping cart that has a unique entity identifier, which in your case, is entity id 64.

The Operator pattern provides an extension mechanism to Kubernetes that captures human operator knowledge about a service, like an Akka Cluster, in software to automate its operation. KUDO, which stands for Kubernetes Universal Declarative Operator, is an open source toolkit for implementing Kubernetes Operators using a declarative approach, with a focus on ease of use for developers and cluster admins. 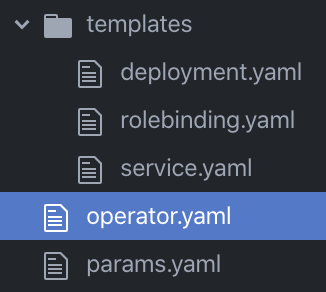 Let’s have a closer look at the YAML artifacts.

As an Operator you need the following prerequisites before you can get started with the sample Akka Cluster operator.

In the following we show the lifecycle operations supported by the KUDO based sample Akka Cluster operator. The steps can also be found in the templates/akka/README.md of the repo.

From the templates/akka/operator folder of the cloned kudobuilder/operators repo run the Kudo install command.

The created sample Akka Cluster serves the visual that we learned about in the first part of this blog. We get it by entering the URL created for its Service of type LoadBalancer into a browser. From the cluster visual we see that a cluster with three nodes got created, which is the default NODE_COUNT set in the params.yaml file. 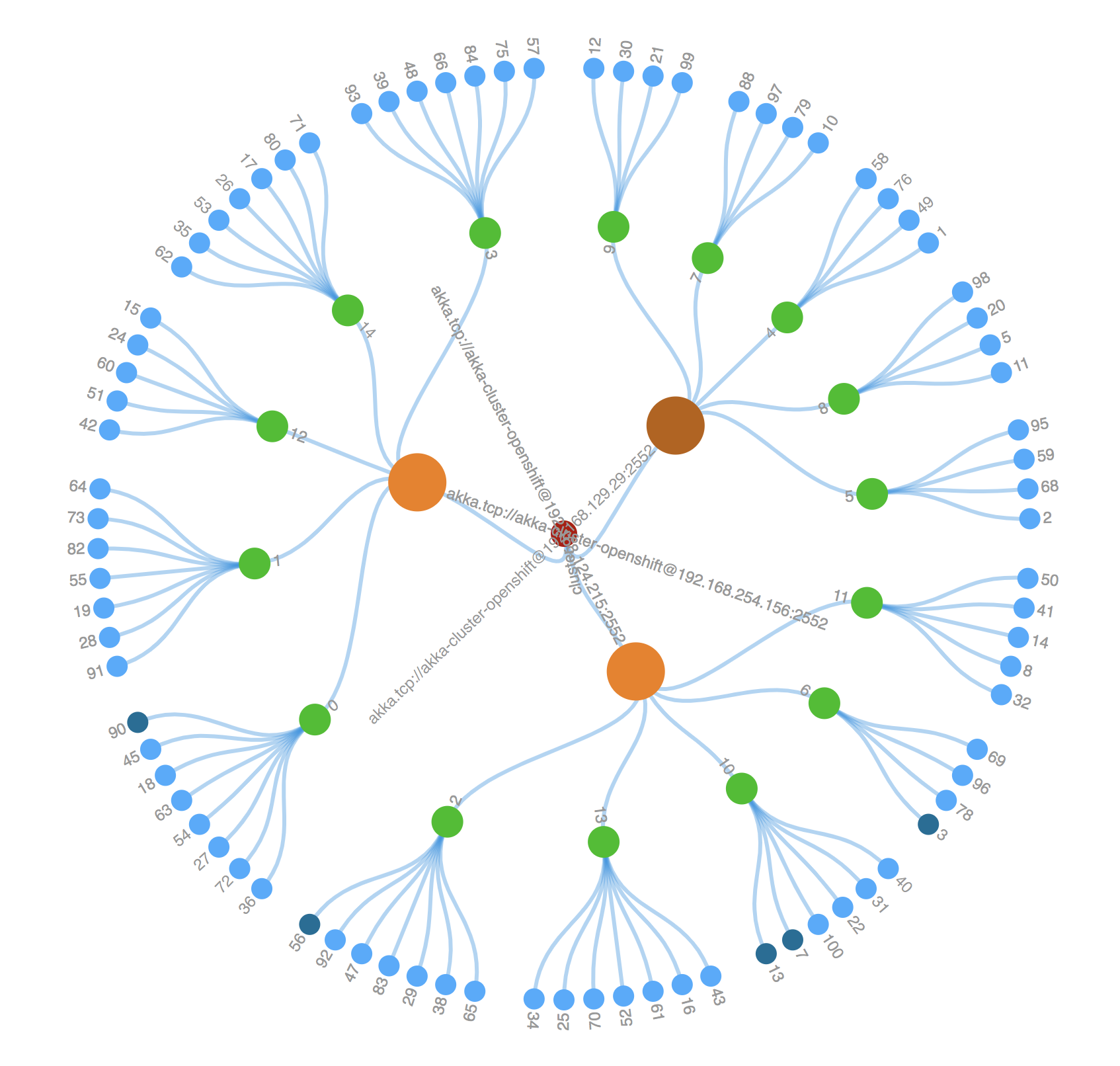 As an Operator you want to be able to scale the Akka Cluster as the request load increases. We scale the cluster by increasing the NODE_COUNT to four running the Kudo update command.

Monitoring the cluster visual we see that a fourth cluster node gets created, and that the shards with their entities get redistributed. 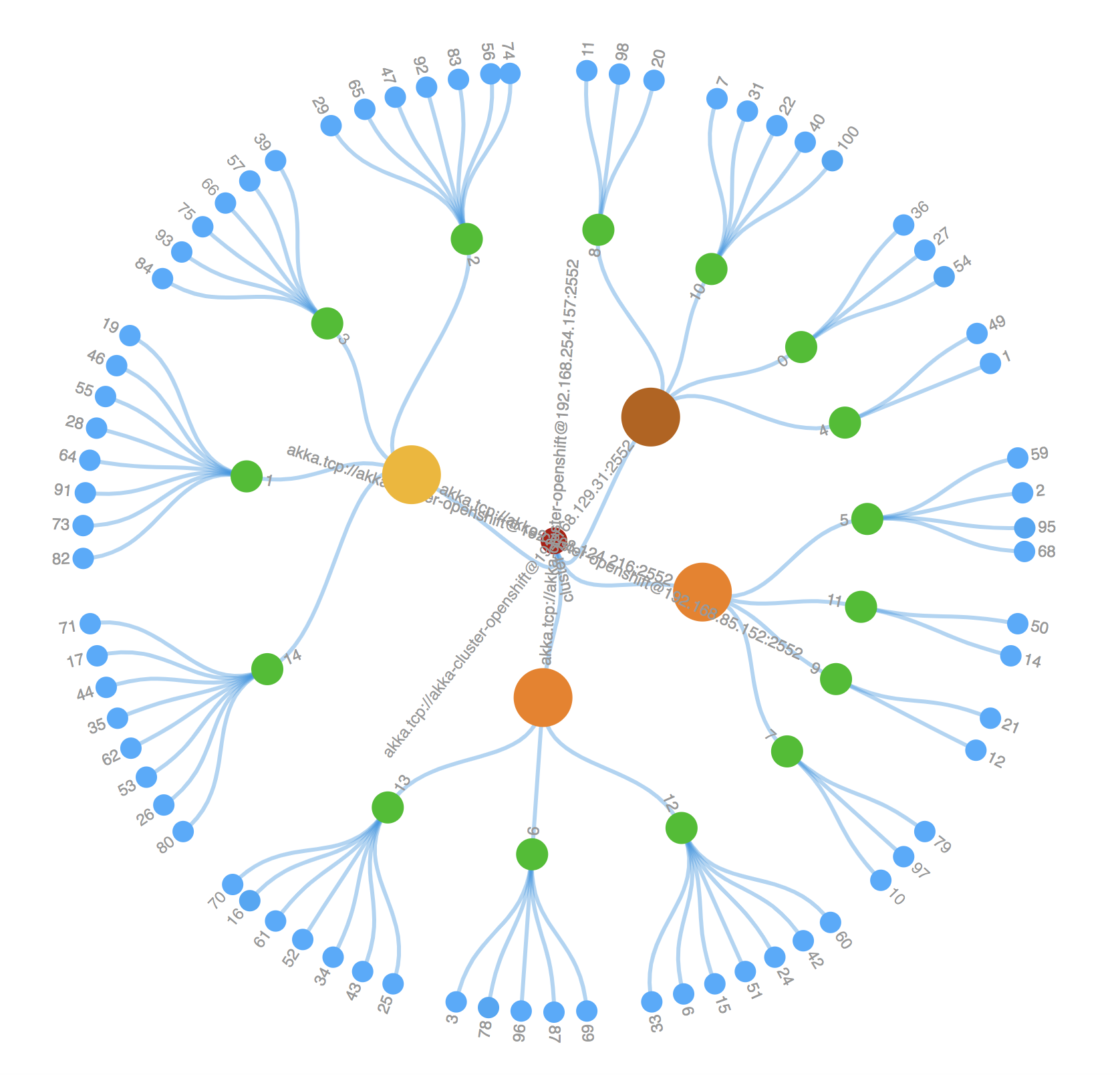 As an Operator you want that when cluster nodes fail that they get automatically restarted by the Akka Cluster operator. We simulate the failure by deleting a cluster pod running the following.

Monitoring the cluster visual we see the cluster nodes are going to 3 with respective shard reallocation. The Akka Cluster operator detects the situation and brings the cluster back to the NODE_COUNT goal state of 4.

We create a new version of our sample Akka Cluster operator with edits of the following YAML artifacts.

From the templates/akka/operator folder run the kudo upgrade command.

The combination of Akka and Kubernetes has unlocked the delivery a whole new class of Cloud Native applications; an elastic, responsive, resilient, stateful application layer (Akka), with a battle tested, dynamic infrastructure orchestrator (Kubernetes) gives developers the power to manage vast and complex state models as if they were local, single threaded representations of data. Kudo goes further than Kubernetes to deliver a simple, rich set of descriptors and operations that are key to managing both the runtime, and the persistence stores necessary for stateful applications and systems, so ensuring that you are scaling the database, or the event log at the same rate as the application is trivial. This cannot be underestimated in importance, and the elegance by which these coordination tasks are solved cannot be overemphasized.

Hugh McKee is a developer advocate at Lightbend. He has had a long career building applications that evolved slowly, that inefficiently utilized their infrastructure, and were brittle and prone to failure. Hugh has learned from his past mistakes, battle scars, and a few wins. And the learning never stops. Now his focus is on helping other developers and architects build resilient, scalable, reactive, distributed systems. Hugh frequently speaks at conferences. He is the author of Designing Reactive Systems: The Role Of Actors In Distributed Architecture (O'Reilly).

The Power of Akka optimized for the cloud.
Available now on Google Cloud and AWS.