Known to amplify fan’s engagement with sports, Dream11 has experienced tremendous growth, from 1 million users in 2014 to over 80 million at the close of 2019. Based on real-world sporting events, users join fantasy contests that are automatically generated and promoted by Dream11 through the app. Each contest can have as few as two participants to upwards of tens of millions that can join up until the real-world event begins.

With the majority of user traffic spiking the hour leading up to the real-world event, the original application architecture could no longer process the tens of thousands of users per second requesting to join contests associated with a single event, let alone overlapping events. Resulting in participants inability to register or being kicked out of the registration process entirely. The app also strained to ensure contests did not exceed a set maximum number of participants as determined by Dream11 while creating the contest. If over, Dream11 cancels the entire contest and refunds fees. This excessive demand on a system already overworked and unstable weakened customer loyalty.

Dream11 required a highly elastic, self-healing system that could:

A tall order to fill before the Indian Premier League season, one of two peak seasons for Dream11, began in three months time. Failure to launch on time was not an option and would result in significant revenue loss.

Dream11 went live with its new Contest Join app one full month ahead of schedule. After the first contest code review and a few minor code adjustments were done by Embedded Lightbend Engineers. As a result, performance levels increased to more than 30,000 user joins per second at 150ms latency less than one week after launch—well exceeding original goals.

Since implementing the Akka Platform, Dream11 has reduced cloud infrastructure costs by 30%, gained the scalability to grow at any rate of adoption for years to come, while delivering the uninterrupted experience customers expect to receive. 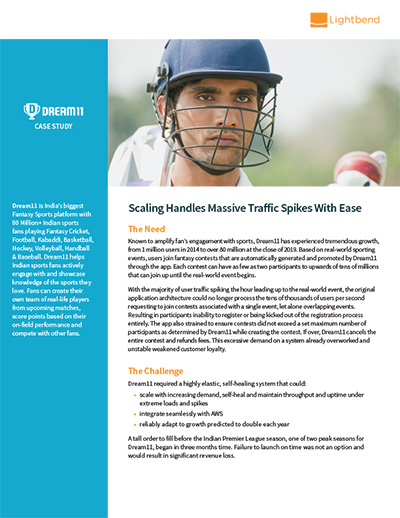