How To Deploy Kubeflow On Lightbend Platform With OpenShift - Part 3: Kubeflow Support Components

In Part 2 of “How To Deploy And Use Kubeflow On OpenShift”, we looked at Installation and some of the additional components used by Kubeflow, such as Ambassador, Spartakus, Argo, Minio, etc. In this post, we will describe and show how to use some of them.

Ambassador is an open source, Kubernetes-native microservices API gateway built on the Envoy Proxy. It is aimed to support multiple, independent teams that need to rapidly publish, monitor, and update services for end users. Ambassador can also be used to handle the functions of a Kubernetes ingress controller and load balancer.

The main features of Ambassador are: 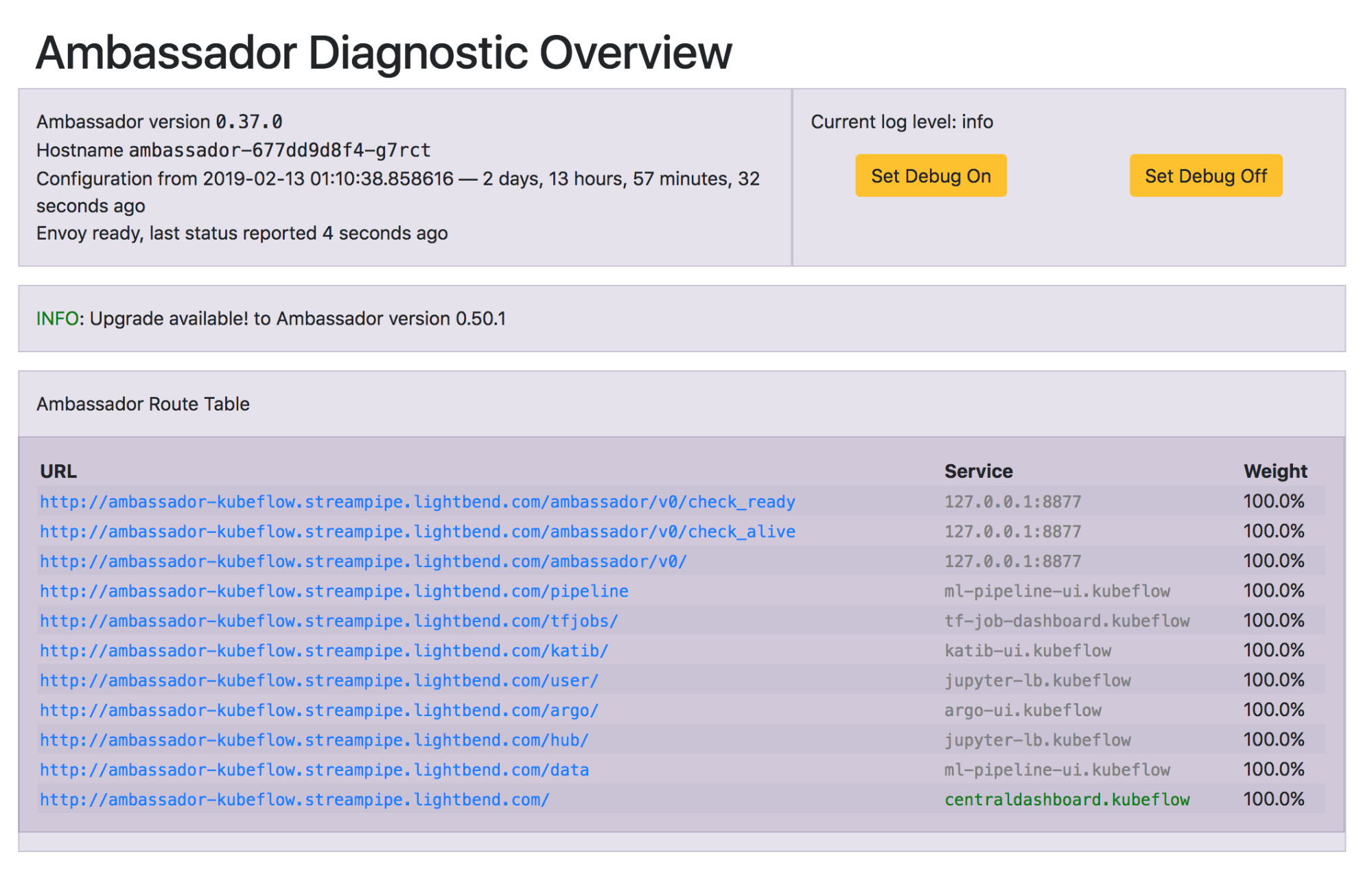 This shows the current Ambassador state and all routes known to Ambassador. To get the information about specific route click on it and you will see this route: 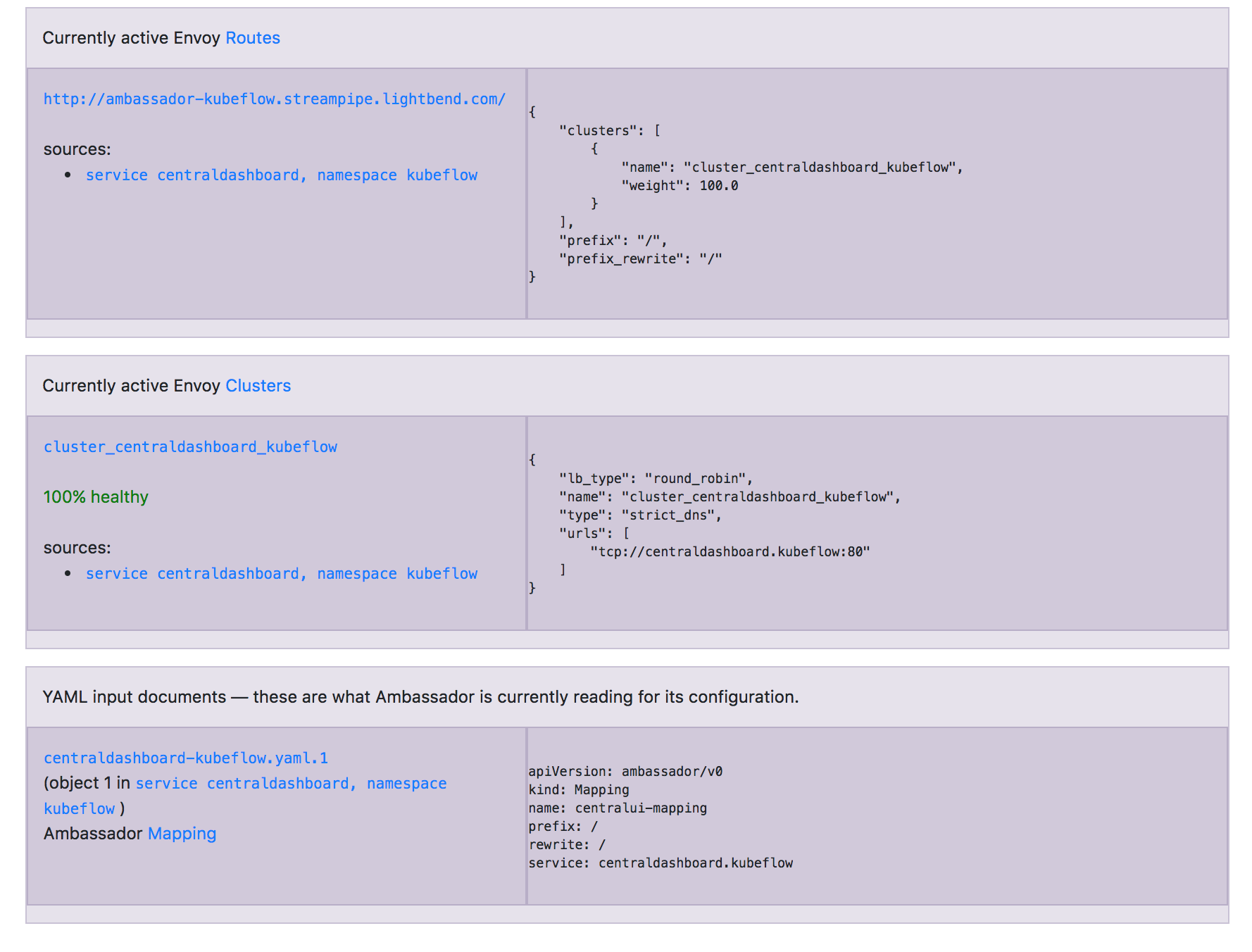 Argo is an open-source, container-native workflow engine for Kubernetes. It is a foundation for Kubeflow Pipelines (see Part 8 of this series). Kubeflow installs all of the Argo components.

Note: Although Kubeflow installs all of the Argo components, the Argo UI installed by Kubeflow is not available. To enable the Argo UI, go to the argo-ui deployment in the OpenShift console and edit the environment portion in deployment.yaml as follows:

Once this is done you can create a route to a argo-ui and use it to access the UI.

You can install Argo locally following these instructions. On MacOS, Argo installation can be done using HomeBrew:

Before using Argo, it is necessary to create an additional role and role binding. To be able to run Argo successfully, additional RBAC permissions have to be given to the Argo service account under whichworkflow-controller is running. To do this, create the following YAML file defining both the role and role binding and save it locally as argo-role.yaml:

Next, run the following command to install it:

It is also necessary to give additional (privileged) permissions to an argo role using the following command:

Now we can run the the Argo examples, following these instructions. After starting the examples1, you will see the following:

You can also get information about specific workflow execution, for example with the following command:

To get the execution logs, use this command:

You can also delete a specific workflow using the following command:

Alternatively you can get the same information using the Argo UI:

You can also look at the details of the flow by clicking a specific workflow:

Kubeflow installs both the Minio server and UI. This allows you to expose a minio-service as a Route and get to the Minio UI to explore its content:

In addition, you can also install the Minio CLI (mc) on your workstation. For MacOS, use HomeBrew:

Where the Minio service URL is the URL of the Minio route. This allows you to use mc to access information inside Minio in the cluster:

Additional mc commands can be found here. Minio also provides support for several languages, including Java, Python and Go. We will show some examples of Minio usage in a Jupyter notebook in the next post.

Project Spartakus aims at collecting usage information about Kubernetes clusters. This information will help the Kubernetes development team to understand what people are doing with a cluster and how to better utilize it.

Spartakus differentiates between two roles (both supported by the same program):

Kubeflow installs a Spartakus volunteer with the following configuration:

Change the database URL to set up your own Spartakus database location for data collection.

Additionally, Kubeflow provides support for Istio for TensorFlow Serving (Part 7 in this series). It provides additional metrics for Tensorflow Serving and simplifies updating models. It also provides integration with Prometheus for metrics collection while components run.

That’s all for this part. Check out the next post on using JupyterHub with Kubeflow, and thanks for reading!

p.s. If you’d like to get professional guidance on best-practices and how-tos with Machine Learning, simply contact us to learn how Lightbend can help.

1 Coinflip example implementation requires some additional capabilities, so I skipped it. ↩